In the project you will work in a team that develops a new quantum simulation and computation platform: trapped ions that are pinned by optical microtraps. Simulating quantum systems on classical computers is extremely hard, as the resources required scale exponentially with system size. This limitation prevents physicists from testing whether microscopic model Hamiltonians of solid-state physics such as the Fermi-Hubbard model correctly predict emergent phenomena in many-body quantum systems (e.g., magnetic phases and phase transitions, superconductivity). Richard Feynman proposed to solve this problem by having well-controlled laboratory quantum systems simulate quantum problems of interest. Such quantum simulators would be the quantum analogue of a wide range of simulators of complex classical physics, ranging from crash test dummies to numerical weather-prediction software. Trapped ions are among the most reliable quantum simulators to date and several groups have shown impressive progress using ions to simulate quantum magnetism.

You will answer two questions: 1) Can we scale up the trapped ion quantum simulator by using two-dimensional ion crystals instead of the one-dimensional crystals used up until now? 2) Can we use optical tweezers to tune the soundwave spectrum in the crystal and use these to simulate quantum magnets?

In the project, we will pin particular ions in the crystal with optical tweezers that derive from spatial light modulators to modify the soundwave spectrum of the ion crystal. In this way, the soundwaves start mediating spin-spin interactions between the ions. Finding the optical tweezer pattern needed for obtaining a certain spin-spin interaction is highly non-trivial. The project therefore also has a theoretical component with a PhD student who is co-supervised by Dr. Philippe Corboz and aims at developing numerical tools for finding realistic optical tweezer settings. Furthermore, we will identify relevant models that are amenable for simulation on our platform as well as experimental observables and phase diagrams. 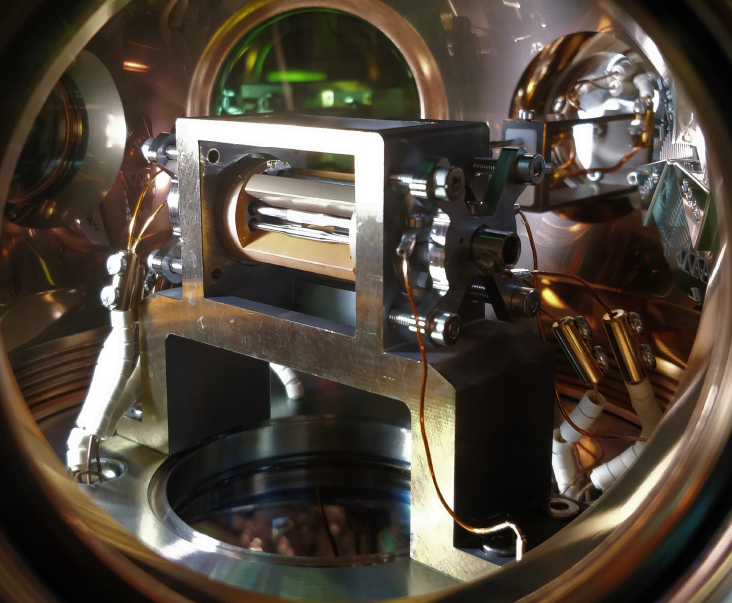 Figure: The new ion trap that will be used in the project. We have recently trapped our first ions in it.

You will work in a team with the two PhD students that are already working on the project and the PI. You will design and implement optical tweezer arrays that are controlled by AODs and SLMs. You will develop experimental tools to detect the soundwave spectrum of the ion crystal, to laser cool away thermally excited soundwaves and to implement soundwave-mediated spin-spin interactions. For this, you will build up a new laser system that can be used to couple the spin of the ions to the soundwaves.

Once we have characterized our quantum simulation platform, you will focus in particular on programming it to simulate models in which competing interactions cause spin frustration. Such complex systems are of key interest to understand emergent phenomena in solid-state physics, but are extremely hard to simulate on classical computers due to the exponential growth of the Hilbert space and because standard numerical approaches (Monte Carlo) fail due to the negative sign problem.

If you interested in the possibilities of joining our team please send me an email– r.gerritsma@uva.nl